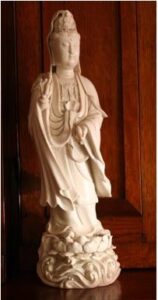 Maha Karuna Ch’an knows no formal structure, no official groups, no membership, no hierarchy, no set curriculum of study, no formalized koan practice and no planned training program.

Maha Karuna Ch’an is an informal and fundamentally open sangha of laypersons who dedicate themselves, as individuals and each according to an individual path, to the way of Zen and its integration within their lives.

Maha Karuna Ch’an organizes a sesshin in Steyl several times per year. There, the traditional forms of Zen training are respected: the silence, zazen, the singing of the sutras, dhamma talks and private talks (dokusan) with the teacher.

Maha Karuna Ch’an is led by Ton Lathouwers, who received transmission (authorization as Ch’an teacher) in 1987 from the Chinese Ch’an master Teh Cheng.

During his life, Teh Cheng (1923-2002) was the coordinator and head of the Sangha Agung Indonesia, in which all of the Buddhist schools of Indonesia are brought together. He was also the highest authority of the Guang Hua Ssu denomination of Linji (Rinzai-) Ch’an Buddhism in Fujuan, China.

Maha Karuna Ch’an is also inspired by Hisamatsu Shin’ichi (1889-1980), founder of the most important renewal movement within Japanese Zen, the FAS Society. It was under the guidance of his colleague and successor, Masao Abe, that Ton Lathouwers began the Zen way in 1971.

In the word FAS, the three essential dimensions of existence are expressed: the F from Formless Self, the A from All Mankind, and the S from Suprahistorical History.

Hisamatsu was convinced that the traditional Zen was remiss in recognizing the problems having to do with the world and history. Attention was unilaterally directed towards awakening to the True Self.

On the other hand, science and socialism occupied themselves with the concrete problems of the world and history, but ignored awakening to the True Self. Consequently, Hisamatsu was deeply convinced of both the one-sidedness of traditional Zen as well as that of science and social engagement. What he had in mind was a manner by which full justice would be done to all of the three fundamental aspects of human existence. And this would also form the basis, then, for a genuine dialogue between East and West.