Since 2012 there are once again contacts between Maha Karuna Ch’an and China,  and with the head monastery of our tradition (the Longquan monastery) in particular. 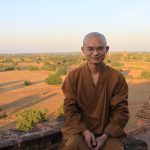 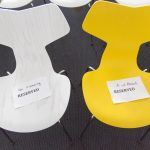 André van der Braak made a visit in October 2012.  This visit was part of a continuous dialogue. In June 2013 a return visit of Ven. Xiangqing to the Netherlands took place, where they lunched with Ton and Louise, and afterwards addressed the VU (University of Amsterdam). In July 2013 André again visited the Longquan monastery, where he held a lecture about compassion (see this page …).

In January 2014 two Chinese monks came to the Netherlands: Ven. Xianqing and Ven. Xianwei.  They joined in the January sesshin, and during  the following week they toured the whole country to meet  and join in the activities of local Maha Karuna groups.

In this post you can see some pictures of the January 2014’s retreat, with both Venerables. 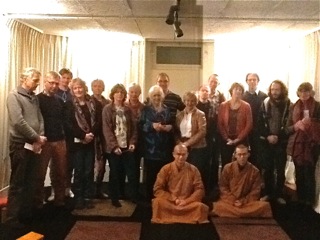 On Monday January 27th they were at Zen group Hengelo. There they joined in the meditation, sang the Heart Sutra, spoke about their life in the monastery, slept and had breakfast./On the left a picture of this day.

Here it is followed by an impression of their visit to Zen in Zutphen on Wednesday January 29th. On Friday Chinese New Year was celebrated with the Chinese community in The Hague.

On Saturday February 1st the monks went to a zen day in Groningen.  Pictures and mp3s (of the lecture of André van der Braak, a question and answer session with the monks, as well as a part of the reciting of the Heart Sutra in Chinese) can be found in this post.

On Sunday February 2nd the tour went to Zen Group Breda. Tom Jumelet wrote down some account and sent some pictures, that you can read and have a look at in this post.

Furthermore the monks were hosted by

Via this page and our Facebook group we’ll keep you up to date of all developments.